The Surprising Gift that all the Kids Loved Do you know how sometimes you’re sure that a toy will be a hit but sadly it barely gets used before it’s broken or ignored?

But then sometimes there’s a toy that you might not expect to be a favorite but that the kids absolutely love and gravitate toward and use in all different kinds of ways? And that other children who come over want to play with it, too?

Do you have that experience with kids’ toys? We had that experience with a flower toy that I bought from Mama May I last spring. We gave it to my niece Zoe for her first birthday, knowing how little kids like to put things in and out of holes and also thinking it looked kind of pretty. But not giving it a whole lot of thought beyond that. It’s been such a hit! Not only with the one year old, but also with her big sister, and both of their friends.

The four cousins all played with it during our birthday visit. My sister-in-law, Jenny, says that the flower toy is the one gift that has gotten consistent use over the last half year.

Zoe, her 4-year-old sister Sophia, and their friends all play with it over and over and in all different kinds of ways. 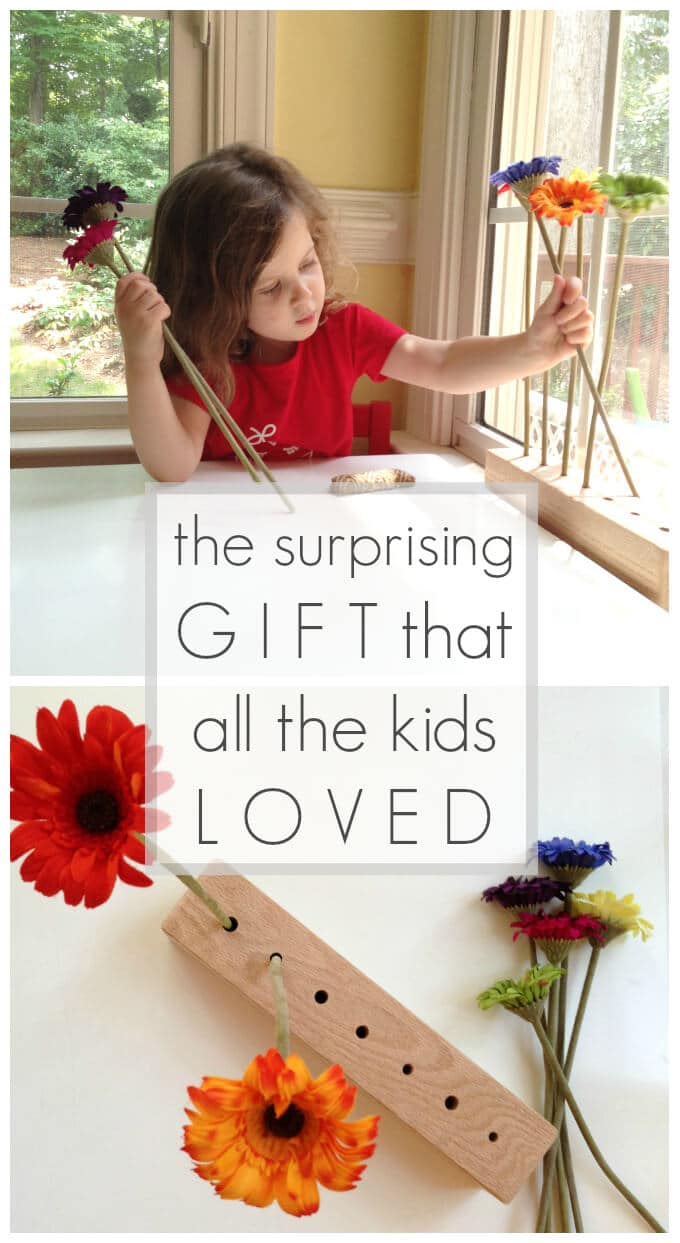 Frankly, I had forgotten about the flower toy altogether until Jenny raved about it and asked me where I had bought it.

So I searched my photo archives to see if I had some usable photos of the kids using the flower gift.

I hadn’t brought my camera on that trip, so all the photos are from my phone, but they were decent enough so I thought I ought to do a public service announcement sort of post. From one parent to another. Especially since we all have gift giving on our minds right now. Here’s the flower toy if you want to learn more about it or buy one. It’s called My Little Nurture Box on the Mama May I site.

Mama May I sells handmade wooden toys for kids as well as a few non-wooden things. Their focus is on learning toys and they sell a lot of open ended toys as well that are great for creative play.

Some of our favorite open ended toys from Mama May I have been ::

Mama May I is a small family-owned business run by Jessica Perkins. She has been a sponsor on The Artful Parent in the past, although this is not a sponsored post. What are your children’s favorite open ended toys?

UPDATE :: When I told Jessica that I was posting about her flower toy, she offered to add a discount for Artful Parent readers.

Use Code ARTFULHOLIDAY to qualify for 15% off your purchase of $30 or more AND be entered to win $100 Gift Card! Giveaway ends Monday Dec 8th when winner will be announced. The coupon code will work until the end of the year. Join our newsletter and get a FREE eBook with The 10 BEST Kids Art Ideas!