(One of two poster-board size works Maia filled with spirals after school yesterday.)

Okay, after all the fuss, I thought I should at least share some of the drawings Maia’s been doing since starting Kindergarten.

The change in her drawing style from before K to now (almost two months in) is marked and happened almost immediately. She repeats the same symbols over and over, and as others have remarked about their children’s artwork, Maia’s drawings have gotten much more simplistic.

It’s hard not to worry! Not just about her creativity, but also about the overall effect of school.

But your comments over the last two days have helped a lot. Many of you have echoed my own concerns and talked about similar changes your children went through at this age, and others have reassured me that this can be a normal change (especially for girls), and that it’s a phase (hopefully!!) that can be worked through. (Detail of spirals and hearts. Note the change in hearts from left to right after I asked her how many different kinds of hearts she could draw. Thanks for the suggestion, Vera!)

I’m going to share a few excerpts from the many great comments people have left over the last couple of days.

Here’s what Julie Liddle (from Art in Hand) said:

In a nutshell, I think what you are seeing happening in school is a reflection of a social/developmental phenomenon. Her creativity is still in there, and it will find it’s way out a-plenty because the foundation is SO THERE, BUT she is also at the age now where she is noticing peers, connecting with them, and indentifying with them. Her orbit is growing, so she’s not just identifying with her creative mama anymore (sorry!)….

But it is an interesting phenomenon among girls at this age, in particular, that they seem to want to be just like each other, and draw just like each other. I see those matching rainbow/flower/heart drawings by girls in k-2nd grade ALL THE TIME (and of course I rather loathe them). Boys don’t seem to show the same desire to conform, but I guess it fits with the way girls play…they want to get along, work things out, like others and be liked by them, and I think these stereotyped drawings of those “pretty/lovey” images are all part of that desire. (A few of the many, many heart flowers Maia has drawn lately)

It’s very good for children, and very natural too, for them to copy favorite characters from their books and from their lives. I used to draw Little Lulu and Casper the Ghost all over everything. I loved it! It’s part of art to try one’s hand at copying or mimicking. Many art students in universities spend hours and hours attempting to paint the works of the great masters, and are required to do so as a study. It doesn’t mean they only want to copy, it’s a tool for learning.

Allowing Maia the freedom to explore art in all its forms is a great compliment to your ability to allow Maia to somewhat educate herself with your blessing for her to try. With my own kindergarten littles I notice a lot of copying symbols and ideas from friends. In this early part of school it’s all about relationships and definitely not unusual for children to ‘try on’ the style of their friends. I remember doing the same this as a child. (Repetition of spirals and stick figures, combined with words copied from Starfall.com)

I saw a lot of this copying behavior in my classroom. I can tell you it extends beyond the pictures the kids draw. I think in the context of Kindergarten being a beginning point for kids to develop an understanding of a larger world it is valuable and important for them to explore copying others. I think it is equally, or perhaps more important for them to have a lot of conversations with adults about who they are as individuals. And also about the strength that comes from people being different. (Repetition of smiley faces, combined with creative use of tape and cut paper on a cardboard backing.)

And, last but not least, Olugbemisola said:

I had the same experiences and concerns when my daughter entered kindergarten, but the inclination to copy or draw like her peers seems to be passing (she’s just started second grade, and I’ve noticed her settling back into drawing inspiration from her own imagination). And she did continue to a lot of other independent and unique art work (paper cutting) during that time, which was fun to watch.

Thanks again for all your comments!

While I am still somewhat concerned, I am also very interested in watching the changes that are taking place in Maia and her drawing. The more I see, the more I want to learn. I think one of these days (perhaps when Daphne is a little older), I may look into a graduate program in early childhood education… 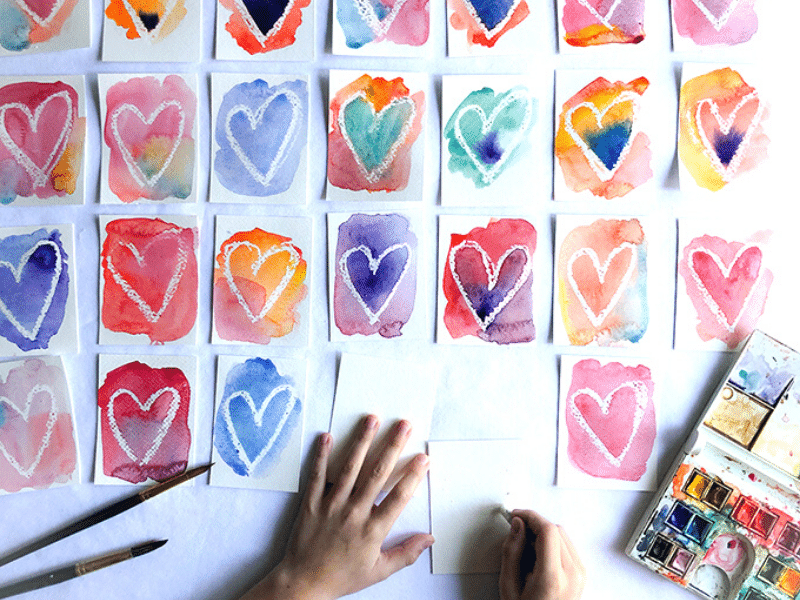