Leaf Casting with Plaster of Paris Leaf casting with plaster of Paris turns out to be as easy as playdough casting.

Here’s the gold-painted hosta leaf that I shared on Facebook and Google+ last night.

After our plaster casting with playdough the other day, we were inspired to try again with nature items. We started with a nature walk around the garden and the girls filled their buckets with leaves, pinecones, stones, crabapples, seed pods, flowers, peppers, seed heads, and okra.

First we made playdough casts of the nature items…

…and then decided to try leaf casting with plaster. I had seen tutorials for making leaf stepping stones with concrete and have been planning to do so all summer. But for some reason, the concrete kept being a barrier to making them. I’d have to buy it. And mix it. And concrete is unwieldy… And, and…

But, we already had the plaster of Paris and it is so easy to mix up (two parts plaster to one part water), so we tried it first with a large okra leaf outside.

And then with an assortment of leaves inside (placed over wax paper to protect the table). From left to right are a hosta leaf, an oakleaf hydrangea leaf, a fern frond, a perilla leaf, and two viburnum leaves.

As before, we mixed the plaster of Paris in a gallon-sized ziplock plastic bag and snipped off the end to have control over it as I squeezed it out. I tried to just squeeze within the perimeter of the leaf, but it overflowed a bit onto the wax paper.

Mostly I squeezed the plaster and Maia spread it around with a spoon.

Maia and Daphne placed more leaves on top of the plaster for extra leaf prints and extra fun.

Once the plaster of Paris had hardened, the kids pulled off the top leaves.

Then we turned the plaster leaves over and pulled off the main leaves as well. This one is the oakleaf hydrangea.

The hosta plaster leaf turned out really well, too.

And the okra plaster leaf is amazing, but so large that pieces broke off.

If you have any ideas for stabilizing the larger plaster leaves, please let me know!

We painted our plaster leaves with liquid watercolors. As you can see above, the fern never came out of the plaster. So now we know that ferns (at least this kind) don’t work well for leaf casting. But it’s still beautiful.

stayed beautiful and perfect, but the rest of the liquid watercolors soaked into the plaster. We ended up re-painting the leaves with with BioColor paint

after a few days (except for the leaves with the metallic watercolors).

I don’t have pics of the BioColor-painted leaves yet, but they are beautiful too and the paint stays on the surface of the plaster just fine (it’s not quite as translucent, though). You could also just dye the plaster with food coloring or something ahead of time if you wanted to. Or just use the metallic liquid watercolors

. They really do look amazing on these leaves.

Here Maia is arranging all the plaster leaves, pinecones, and other nature items on my piece of velvet for a photo shoot. 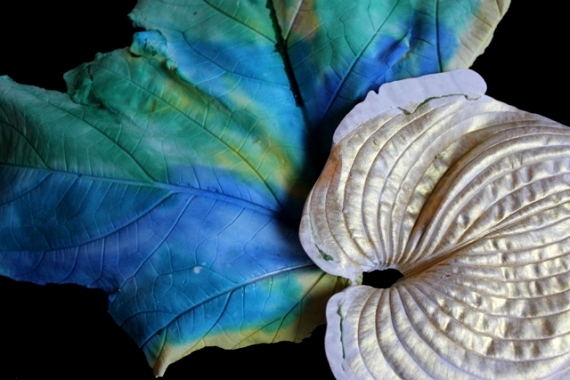 We can’t wait to do more of this leaf casting with plaster!

Maia has already pointed out which elephant ear leaf she wants to use. And, thinking ahead to Autumn, I want to make some leaves for a fall nature table and paint them in golds, reds, and yellows. And Maia wants to make some as Christmas ornaments. We always have lots of ideas…

Update: We’ve since made our Autumn leaves and LOVE them!