Drawing to Music with Children 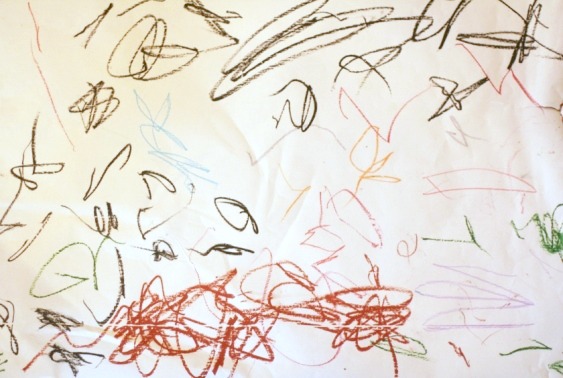 As a faithful Artful Parent reader, I often hear a soundtrack of music running through my head as I read the blog. I can usually hear the folksy tunes of Elizabeth Mitchell or the energetic music of Dan Zanes as I scan the most recent posts for inspiration.

At our house music plays a big role in our day-to-day life.

Not playing it, although my husband does play the guitar and compose (usually sweet and silly) songs for our girls, but listening to it.

Music helps us keep calm and carry on. It helps us focus and daydream, sleep and dance, and especially it helps us make art! There is a term in the art world; synaesthesia.

Synaesthasia is, to put it briefly, “the union of the senses or the interchangeability of sensory perceptions.”

Years ago I volunteered as a docent at the Hirshhorn gallery in Washington DC when a fascinating exhibit called “Visual Music” opened. The show involved exploring how sensory perception of one kind could manifest itself as a sensory experience of another kind; one experience being the phenomenon of seeing color when hearing a certain sound. All well and good, right, but what does this have to do with making art with children!?

I’ve wanted to try out the idea of this marriage of the senses of sight and sound with my 2- and 4-year-old daughters, Josephine and Tess, for some time, using some of our favorite music. We love all kinds of music from Woody Guthrie (creator of my favorite children’s music) to Peter, Paul, and Mommy, and the Beatles. For this little experiment with my girls, I decided to try classical music. Flight of the Bumblebee, by Nikolai Rimsky-Korsakov

The Flower Duet, from the opera Lakme, by Leo Delibes
and Fur Elise by Beethoven

Now classical music is not something I know a whole lot about, but I’m learning as I try to expose my girls to a wide variety of music and have discovered a few nice resources.

We were introduced to Lakme and the Flower Duet on a CD we checked out from the library, “The Classical Child at the Opera,” a really great introduction to opera for kids…and parents too! We also like the Music for Little People series of CD’s with choices from classical music to show tunes, but I checked out Beethoven’s Wig for Fur Elise and have a copy of Green Golly and her Golden Flute (a CD created by two musicians, calling themselves Flute Sweet and Tickletoon, to introduce kids to classical music) which includes the Flight of the Bumblebee. Other possible choices for this project were some other favorites of the genre; Swan Lake by Tchaikovsky, Peter and the Wolf, by Prokofiev, or something from the Nutcracker, also by Tchaikovsky.

Josephine was pretty enthusiastic about drawing to the music, in response to the music.  Tess (my two year old) seemed pretty happy too, although if she has a crayon and some paper she’s pretty happy.  I gave them regular crayons, markers, and slick sticks to use in a wide variety of colors on large pieces of easel paper I taped to the floor. I think they came up with some interesting interpretations!  Not all of them color driven (I did describe to them the phenomenon of seeing certain colors when hearing music…and taught them to say, “synaesthasia”), but the girls enjoyed both the drawing and the music so I think it was a success.

The songs I chose are relatively short so I did play each one for them several times.  In particular Jo explained the drawing she made while listening to Fur Elise as “a pool and blue snow,” she thought the Flower Duet reminded her of pink, brown, and blue, and she was inspired to try something more literal in response to Flight of the Bumblebee.  Tess made one drawing, but drew enthusiastically the whole time.

All in all, I think this is a nice way to get little ones drawing and really listening to music at the same time, and introducing them to the idea of the interplay of the senses.

Have you tried drawing to music?  Any music in particular that inspires you or your children? I’m Mary, mother to two girls aged two and four, currently filling my days toddler wrangling, finger painting, and placating the many moods of the pre-schooler.  Working on starting a blog, The Forager’s Landscape, and trying to approach life creatively! 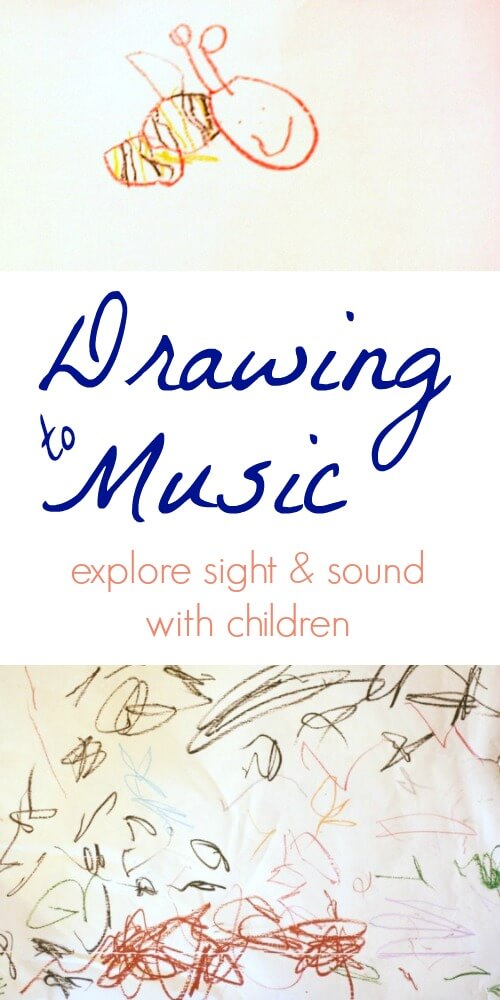