We’re Going on a Sound Hunt! Do you have a child who loves to make noise? Consider going on a sound hunt! Helping kids learn how to listen with intent (which we tried with music) and experiment with their own sound making is really engaging for all ages.

I’m going to share a simple activity to help kids appreciate sound in a new way and encourage them to find interesting sounds out in the world.

You can try a sound hunt challenge anywhere—in the backyard, out in nature somewhere, or inside on a rainy or crisp day…

Let’s go on a Sound Hunt!

This activity works equally as wonderfully if you happen to be at a big gathering with cousins and friends or if you’re having a quiet afternoon at home. In fact, the photos from this post came from both a low-key sound hunt in our backyard with just my daughter, Lucia, as well as from a sound hunt among a larger group of Lucia’s friends who were playing out in the woods behind their school one afternoon.

You might want a way to record the sounds you find.

While you can find great enjoyment in a sound hunt without a recording device, the excitement quota is certainly raised if you have access to one.

If you have a smartphone, you can easily download a free recording app (I use Audio Recorder for my Android; Voice Recorder Pro looks like a good iPhone option). Many phones already have a built in voice memo device that you can use to record sound.

Or if you want to go old school, it’s pretty easy to find an old tape recorder at a thrift store or you can pick up a basic tape recorder fairly cheaply (here’s one on Amazon).

We have this super awesome Fisher Price tape recorder at our house that gets an amazing amount of play, including many many recordings of my children singing along to the Suessical the Musical soundtrack. 🙂

Step one: Talk about sound!

Time to get hunting! Lucia’s group of friends recorded splashing in the creek, stomping on piles of leaves, banging on a log with sticks, one of the kids climbing a tree, and a whole host of other sounds.

(If you don’t have a recording device, there’s plenty of enjoyment to be had in the process of hunting for sounds without doing any recording.)

When we first did this activity at our house, Lucia got really into it and really enjoyed turning it into a guessing game. She wandered around the house and yard, giggling, banging, riling up our backyard chickens, and finding various sounds and recording them.

She recorded a set of sounds outside in the backyard and a set of sounds in the playroom. Later, while my husband, Kyle, was cooking dinner, she had great fun recording green beans sizzling, rice pouring in the pot (this one really stumped me!), and cabinet doors opening and closing.

Each time, as she finished recording a few sounds, she would rewind and play back her recording. She took great delight in watching us try to guess what made each sound.

When she and her friends did their sound hunt in the woods, they took turns running to hide behind a tree while the others recorded a sound. After each sound, they played the recording back for the kid who had hidden to see if they could figure out what made the sound. This was actually REALLY hard and only a couple of them guessed correctly!

For the next few days after these sound hunts, whenever my kids seemed restless (I also have a 5-year-old son), I invited them to do a sound challenge. One of them would find and record an interesting sound and the other would have 3 guesses to figure out what it was. They loved it!

Some of the best sounds they found were:

The possibilities are endless!

No matter how you choose to try this, outside or inside, with or without a recorder, I hope you can encourage your kids to notice the sounds that are all around them. There are sounds to be found that happen just through listening (dogs barking, leaves rustling in the wind) and sounds that they have the power to create (like banging a metal bike bell on a pole—which a 4-year-old showed me yesterday at my son’s preschool—it sounds incredible!) 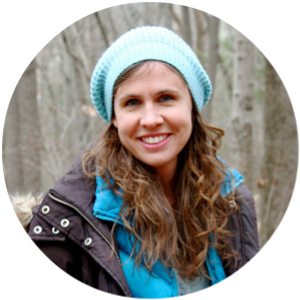 Melissa Garrett is a parent, teacher, social worker, mess maker and lover of art supplies. She has a host of experience teaching and working with lots of different age groups, especially preschoolers. She also has a background in music and loves to integrate sound and art into the classroom and everyday life as much as possible. Melissa loves open-ended art exploration, sewing with unexpected materials, finding interesting sounds in surprising places, going on forest adventures, and letting kids explore the world at their own pace. She has an 8-year-old daughter who really enjoys being covered with paint from head to toe, a 5-year-old son who is possibly the loudest person alive, and a very patient spouse who balances her chaos.
SEE AUTHOR'S POST
PrevPREVIOUS POSTDIY Portable Art Kits for Kids
NEXT POSTA Walk In Gingerbread House for KidsNext