How to Make A DIY Cardboard Dollhouse with Lights! We’ve been building and decorating a DIY cardboard dollhouse this past week. A few actually.

Mostly Daphne and me, with a few cameo appearances by Maia. It’s been a nice change of pace from all the 2-dimensional creating we often do around here and the kids are loving the finished dollhouses!

We added stained glass windows, as we did last time, as well as a string of lights, so they are extra lovely for low-key playtime in the evening before bed or first thing in the morning.

The girls moved their little figurines in, as well as some horses and unicorns. And made beds out of my silver flats padded with socks.

The little mail boxes you see are from the $1 Spot section of Target and have been used for delivering Valentine’s and notes between dolls.

(Note: I made the basic cardboard house structure ahead of time for Daphne. Maia helped create hers and made all the decisions. She could have easily done the whole thing on her own, and has used the glue gun a fair amount, but wanted to work together.)

To make the roof, I cut off two of the longer flaps, trimmed them down to the same length as the shorter ones, and glued them to the remaining flaps to make them longer.

Then I took an additional piece of cardboard, cut it to the same length again and scored it down the middle the long way. I then folded it over to make a “V” and held it in place as the peak of the roof. I glued the two roof pieces to it.

This last step isn’t strictly necessary, and we didn’t do it last time, but it makes for a sturdier dollhouse.

Finally, I shortened a cardboard tube from a paper towel roll and cut the end at an angle (to match the roof pitch) with scissors, and glued it on as the chimney.

Once the basic forms of the cardboard houses were complete, the girls each drew on the windows and doors for me to cut out.

Daphne, especially, loved this step and really got into drawing on the cardboard box/house. We should probably all provide cardboard boxes for our kids to draw on and paint more often!

She decorated the chimney…

…and made many amorphous window shapes in a wide range of sizes (talking about what she was doing the whole time and who the different windows were for).

When she was finished adding doors and windows and chimney decorations, she drew our family on the inside of the house!

4. Have an adult cut windows & doors

I cut out the larger of the windows with my handy X-Acto knife and cut the door on three sides so that it would open and shut.

The next day, I spread a dollar store vinyl tablecloth on the floor, and set out the cardboard houses along with some paints and brushes. Daphne soon wandered over to paint hers.

I love the red roof!

She also painted the roof on my house. And we turned some of the windows into stained glass windows with contact paper and colored tissue paper pieces left over from the heart crowns.

I lined the houses up and strung a couple of strings of Christmas lights through them.

The girls, along with a friend, immediately populated the little village with dolls and animals.

Then they had a horse and sleigh deliver Valentine’s and messages from door to door. And mailbox to mailbox. 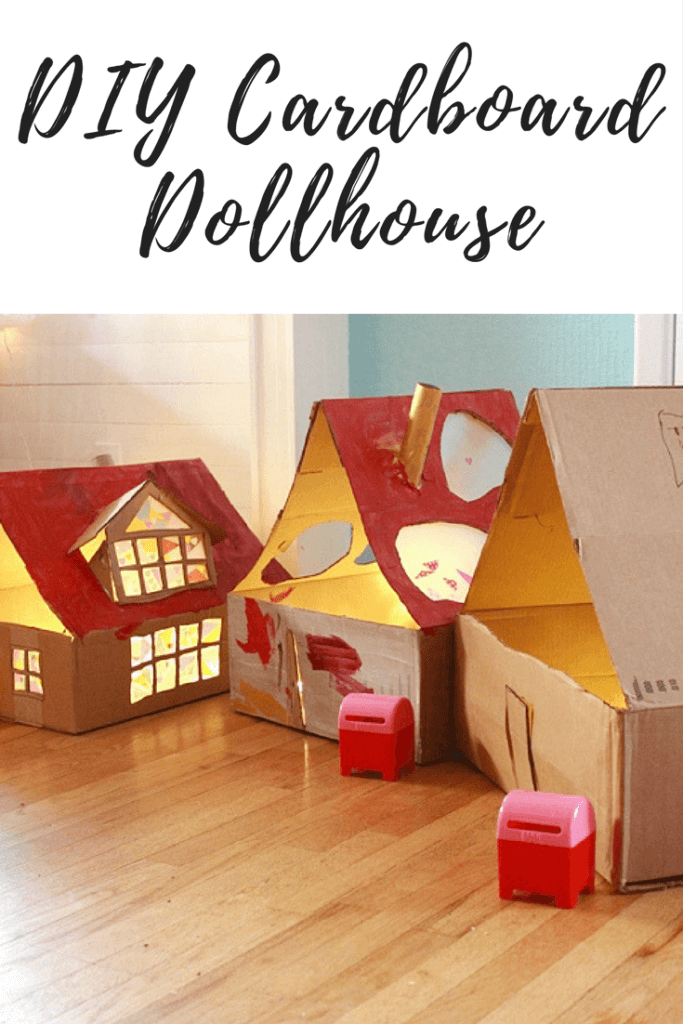 The Best Art Ideas for Kids

How to Make the Best Playdough